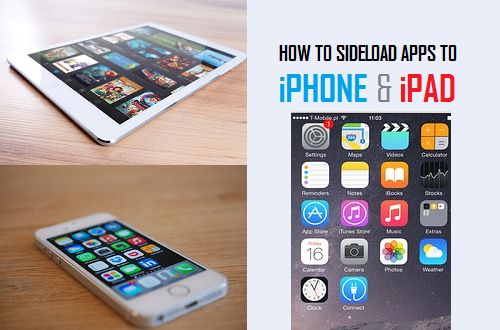 The ability to sideload open source applications or emulators onto your iOS device lets you utilize emulators and apps that aren’t available in the iTunes app store. This article will demonstrate how to sideload apps onto iPhone and iPad at no cost and without jailbreaking your iOS device.

In this article, you should consider sideloading to be the method of downloading apps onto you iPhone and iPad from an alternative source not related to that of iTunes apps store.

Because your iOS device doesn’t permit third-party applications that can be directly downloaded, you will need to sideload these apps through computers onto the iOS device.

Another term you have to know is “Emulator” which is the subject of this article can be described as software that tricks the iOS device into mimicking or emulating a different device.

For instance, GBA4iOS is a popular emulator that can fool the iPhone or iPad into acting as an actual Game Boy console, allowing gamers to enjoy Game Boy Advance Games on your iPhone or iPad.

Below are the most important things you’ll need in order to sideload applications or Emulators onto the iPhone, iPad or iPod.

Xcode 7. The Xcode integrated development platform (IDE) that provides developers with the tools needed to create applications that works on iOS devices. Download the most recent version of Xcode through the Mac app store at no cost.

Mac machine: Xcode only works only on Apple’s Mac computer. It doesn’t work on other computers running operating systems such as Windows Computers or Chromebooks that run the Google Chrome OS.

In the simplest terms, you’ll require an Apple computer to run Xcode.

Source Code It is necessary to have the source code of your App or Emulator you’d like to load onto the iOS device. The source code of the majority of applications and emulators can be found online, however, you have to search for it.

The Key steps to Sideload Apps onto an iOS device

Here are the essential steps you’ll need to follow in order to Sideload apps on the iPhone or iPad at no cost without needing to jailbreak your device.

1. Setup Xcode on your Mac

2. Get Your App’s Source Code into Xcode

3. Connect your device to a Mac and get it ready for Apps Source code

Follow these steps to complete every one of these Key steps that are listed above.

1. Set up for Xcode using your Mac

Follow these steps for setting up Xcode for your Mac and to add the Apple ID.

1. Download Xcode to your Mac in the event that you’ve not already done it.

2. Navigate to the Applications folder on your Mac and then launch Xcode on the spot by clicking it.

3. Once Xcode is installed on your Mac select Xcode in the upper bar. This will open the pop-up menu.

4. From the popup menu, select Preferences.

5. Now from the popup window , select the Accounts tab. Then press”+” button in order to connect an Apple ID to Xcode.

5. You will now be asked to input your login credentials, which are you Apple ID and Password.

If you receive an error message, it is possible to create a brand new Apple ID and log in to Xcode with your new Apple ID.

2. Copy the Source Code of Your App into Xcode

To build and sideload the app onto you iPhone and iPad you’ll need download the source code of the app into Xcode.

For an example take these steps if you are looking to import the source code for the popular GBA4iOS emulator to Xcode. Like we said GBA4iOS is a popular emulator that will fool your iOS device to transform into an actual Game Boy console.

1. Download the source code for GBA4iOS Emulator onto your MAC.

2. Launch the terminal window on MAC and type the commands needed to obtain GBA4iOS sources into Xcode and press Enter.

The code depicted in the picture above (for GBA4iOS) was recommended by Bouke Van Der Bijl who is a creator as well as GitHub contributor.

3. Launch Xcode on your MAC

5. Locate your project file and then click and open it up in Xcode.

Important: It is important to be cautious with the sudo command. You might be asked to input the OS X system password and mistakes can cause damage to your system. It is not recommended if you aren’t accustomed to this procedure.

3. Connect your iOS Device to Mac

You must now attach the device iPhone, iPad or iPod to your Mac computer using the USB cable. Once the Mac computer recognizes your device, follow the steps below.

1. In Xcode from the top bar, click on Product and then from the dropdown menu, click on Destination. Choose the device you have connected as the destination. (See the image below)

You’ll need to create an unique signature for your code to your application to install and build it.

1. Click on your project’s name on the left-hand right side of the Window.

3. Beside Team Name ensure that your name is in the correct format.

5. Build and Sideload Apps and then transfer them onto iPhone or iPad

Click on the play button, which is located on the upper left corner of the Xcode window.

When you press on play, your application is built to be installed, launched and then run using the iPhone or iPad connected to the Mac via the USB port.

Your app is now successfully loaded onto your iOS device. If you encounter the error code, it’s likely that you made a mistake in your source code.